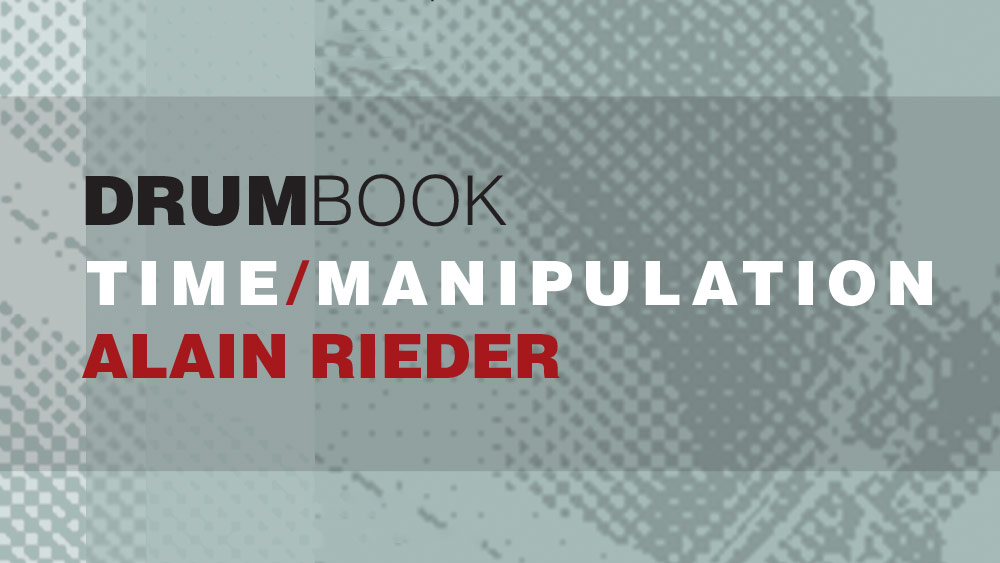 An easy to approach essential rhythmic concepts, set in a realistic, progressive and systematic way.

Time Manipulation Drum Book, by Alain Rieder, is both innovative and rooted in tradition. It is designed to work on coordination in a groove context. It makes it easy to approach essential rhythmic concepts – from the most basic to the most complex – in a realistic, progressive and systematic way.

The first edition of Time Manipulation was published in 1992, receiving positive reviews from well-known drummers (Peter Erskine, Dave Weckl or Joey Baron) as well as from reviewers (Batteur Magazine and Modern Drummer Magazine).

In 1997, Time Manipulation was quoted in Alain Gozzo’s “Drummer’s Ideal Library” in Batteur Magazine. It was out of print for a few years, and the new 2018 edition is revised and expanded. The 140 pages of the book include many exercises and examples, and there is audio in downloadable mp3 files.

“Time Manipulation provides a mean for the student and teacher, to systemically progress through a wealth of rhythmic exercises and disciplines. Alain Rieder has carefully assembled and designed this collection of beats (with various accompanying ostinatos), and it’s suitable for drummers of most every level. As an adjunct to a musical course of study, I can recommend it.”

“I find that Alain’s book Time Manipulation can help in many different areas such as reading, coordinated independence and phrasing. Used as a tool in a complete organized practice routine, I recommend it.”

“It is a very well thought-out book. I really liked the examples of beats you used. It seems to give an immediate result without sounding technically overbearing. Great work!”

“Time Manipulation offers one-bar patterns that are very realistic in terms of potential for everyday use. They progress logically in difficulty from simple quarter and 8th-note patterns to 16th notes and 12/8 time. Because it starts with a basic 8th-note ride pattern, the book can be used as a beginning drumset method. By the end, the student will have a good command of a variety of time feels.”

“When I immersed myself in the pages written by Alain Rieder, I quickly realized that the book was worthy of the greatest interest…
…Masterfully written by an author willing to share the message of contemporary groove playing, in the most direct way possible.”

Alain Rieder was born in Geneva in 1955. He began studying cello at the age of six and, as an adolescent in the late 60s, he gravitated towards the drums. He taught himself how to play them,

first by ear and observation. Inspired by what he heard in his favorite musicians’ performances, Alain began experimenting with odd meters, polyrhythms and displacements, and created his own drumming exercises even in his formative years.

By 1975, Alain was a respected drummer on the local scene, participating in many groups and projects, doing studio work and was also a sought after drum teacher. In 1981, he enrolled at the Musicians Institute in Los Angeles

where he studied with Ralph Humphrey, Joe Porcaro, Joey Baron, Steve Houghton and Efrain Toro. He graduated a year later. Alain Rieder has been playing and teaching the drums professionally ever since.

Alain Rieder wrote about twenty educational articles for Batteur Magazine and Drummer (from France) at the end of the 1990s, and he has more books in the works.